With Palm Sunday this week, let’s talk about Jesus’ triumphant entry into Jerusalem. Remember, this happened just before Passover. Jesus had dinner with Mary and Martha. Lazarus was able to eat with them, because Jesus had raised him from the dead. As dinner was being prepared, Mary poured a fragrance from the Alabaster jar and anointed Jesus feet, wiping them with her hair. Judas took objection to this lavish gift and act of worship. Judas Iscariot, was the one who would soon betray Jesus and was the disciples’ treasurer and embezzler. We see where his heart was. The very next day was when Jesus was to enter Jerusalem. Many people had heard of the story of Lazarus and about the miracles Jesus performed. With this news, they were anxious to see them both. The priests, who were jealous of the attention being taken from them, were plotting to kill Jesus and Lazarus. We see where their hearts lie too. Both the priests and Judas were looking at monetary losses.

My daughter was teaching her children the story of Palm Sunday and asked her three and a half year old son what the people said when Jesus entered Jerusalem, riding the donkey. He said, “Hey, Jesus!” While funny and cute, and not the answer she was looking for; I think he nailed it more than all the attendees at Palm Sunday then and today. When we truly know “Jesus” and what his name means and stands for, then it is sufficient. ‘At the name of Jesus every knee shall bow!’ (Philippians 2:10) Pray in the name of Jesus, ask anything and it will come to pass… (John 14:13-14 & 16:23-24) Call on the name of Jesus and you will be healed. (Mark 16:17-18) By the name of Jesus, we enter into salvation. (Acts 4:12) 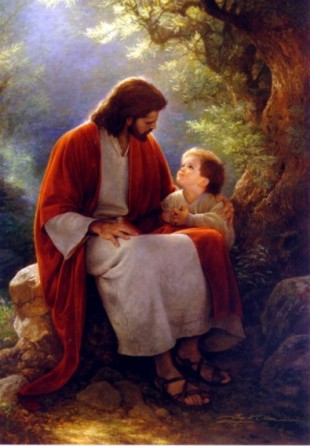 When my 3.5 year-old grandson said, ‘ Hey Jesus,’ he said a mouthful! Isn’t it just like a child to remind us what’s important? He encapsulated everything Jesus stood for by saying his name. The Hebrew meaning of the name Jesus comes from Yeshua, the first part meaning “God.” YWVH used over 6,800 times in the Hebrew Bible and translated, Lord. The second part of the name Yeshua means deliverer, to save, or rescue. Putting this together, Jesus means God delivers, saves, and rescues, through the Messiah, who bears God’s name.

Jesus asked his disciples who they said he was. I ask myself who do I say Jesus is? Yes, I revere him, I do not take lightly his worthiness of revere, awe, wonder, or praise, but I also know that he is approachable. He is my ‘Hey Jesus!’ whenever I need him and he is My deliverer today and everyday. He doesn’t expect palm branches or alabaster jars, but I’ll gladly lay them down and pour them out for him. It’s more an attitude of what’s behind the words, than what the words are. Who do I say Jesus is? He is my all.
Matthew 16:13-20  Let him be your ‘Hey Jesus,’ your all, and your salvation today.